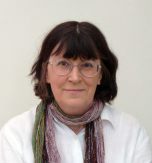 Thorne grew up in Luton, studied history at Aberystwyth University and has lived in Pembrokeshire in Wales since 1983, where she ran a restaurant with her sister, before moving to an old farmhouse in the middle of nowhere to make miniature furniture for collectors and to write. She obtained a law degree through the Open University, but resisted the lure of a career in law in favour of life as an author.

In her novels, Thorne is primarily concerned with the causes and far-reaching consequences of criminal actions on families, even through generations. Her latest novel, Shadows, is set in an atmospheric old house on the Pembrokeshire coast and is a haunting exploration of the dark side of people and landscape.