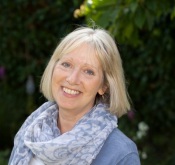 Lynne Francis grew up in Yorkshire, the setting for The Mill Valley Girls novels. She has a degree in English Literature from London University and worked in a variety of jobs after leaving school and university, including a pickle factory, a bacon factory, the Famous Army Stores and Harrods, before settling on non-fiction publishing as a career.

By then living in London, she spent more years than she cares to remember working her way up from editorial assistant to co-running a small publishing company, before returning to Yorkshire on an Arvon creative writing course once her three children had left home.

She now lives in a Kent cottage along a tiny lane not far from the sea, dividing her time between writing, walking and enjoying the countryside.

A new series set in 18th century Margate will be published by Piatkus, beginning in spring 2020 with The Margate Maid.